For white people, their identities rest on the idea of racism as about good or bad people, about moral or immoral singular acts, and if we’re good, moral people we can’t be racist – we don’t engage in those acts. This is one of the most effective adaptations of racism over time—that we can think of racism as only something that individuals either are or are not “doing.”In large part, white fragility—the defensiveness, the fear of conflict—is rooted in this good/bad binary. If you call someone out, they think to themselves, “What you just said was that I am a bad person, and that is intolerable to me.” It’s a deep challenge to the core of our identity as good, moral people.

This is something I sense often when I’m broaching the subject of race or racism with Christian people. When I gave feedback to a  multi-denominational and national conference for catering completely for white people and making racially insensitive jokes, I had two phone calls and a long email from the organizers. I was so thankful they were engaging with me about my concern (YAY!) but basically all I received was one long defense of why what they did was just fine, and that I was being overly sensitive. (Basically- we weren’t meaning to be racist, so, you know, it’s your fault if you think we are).

So, yes, white fragility. It’s a thing. An understandable thing. But it’s something we need to face, white people. And I think if we’re Christian people, our worldview actually empowers us to move through white fragility and into a posture where we are able to receive and accept criticism for the way institutions, structures, and individual acts perpetuate racism.

We are far worse than we imagined…

In a culture that hypes up self-esteem and tells us we’re all good, moral, acceptable people, the gospel tells us actually we’re flawed, broken, and sinful, and even our best intentions are tainted. The Bible goes so far as to say in comparison with the complete goodness of God, our best intentions are like filthy menstrual rags. There’s ugliness in all of us. We are capable of causing great pain. We unintentionally wound everything we touch. We are not perfect.

And we remind ourselves of this every week when we stand and confess together, “We’re sinners.”

How’s that for an antidote to white fragility? When you call out racism you see in me or my institution, or my culture, I don’t have to defend myself. I’m free to accept it because I know I’m actually far worse than anything you could ever say. You are not telling me anything new about myself. I’m not surprised when you call me racist- even if I’ve never considered myself racist, my worldview actually supports the idea that even with good intentions I could still benefit from and perpetuate racism.

Followers of Christ should be the most humble people, willing to admit fault, willing to accept criticism, because we know we are sinful.

More loved than we dreamed…

Once we’ve acknowledged how broken we are, the fact that God would move towards us in love, would repair our broken relationship even though we’re hurtful, sinful people is humbling and liberating. We don’t have to build a reputation for ourselves based on being a good-white-liberal. We can just accept the lavish love God pours out on us undeserving people.

We build our identities around the fact that we are precious, unique, beloved children of God, and no one else’s opinion of us can ever shake that. We are loved. God was willing to die to be with us. We are so loved.

How is this an antidote to white fragility? This also gives us strength to face uncomfortable truths. Who we are is not based on our performance for others- it’s rooted in what God thinks of us. When someone calls us out for racist behavior we don’t have to feel smothered in shame and reject it out of hand to protect ourselves. Instead, we can remember who we are in Christ, and find the strength to work on our internal racism.

Christian white people should be leading the way when it comes to pushing through white fragility. We have the tools.

It’s not easy. But did anyone ever say that becoming like Jesus was easy? 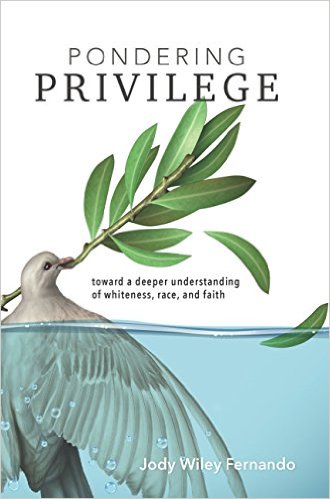 Are you like- YES, I want to think more about this but I don’t even know where to begin? Check out Jody Fernando’s book “Pondering Privilege”. This is a great resource for church leaders or Christians who want to understand what all this white privilege talk is about, and how to have a humble Christian response. Jody writes with passion and honesty, but with an inviting gentleness as well. She shares stories from her own journey, and each chapter ends with reflection questions. You can get it in e-book or hard copy here!

5 thoughts on “The Gospel as an antidote to white fragility”