At the beginning of July, we welcomed the second tiny to the tiny house! It’s still early days, and I’m sure our living situation (and calmness/chaos) will evolve as both kids grow, but right now we are doing well with two in the tiny house.

A while ago, we switched lofts with our son– so our bed is now on the raising/lowering loft (we lower it to sleep and raise it to get it out of the way during the day). That gives our son the whole upstairs to play with his toys and have his bed, and also meant I didn’t have to go downstairs a million times a night when I was pregnant so I could pee. 🙂

Now that we have a baby, we added a small rail on the side of the loft so I’m able to prop up pillows by my elbows for nursing, or balance a drink. We put the baby in his bassinet on top of our storage cubes/chairs, and push it next to our bed when we sleep.

The bassinet is great at this age, because during the day, we can move the baby onto the couch, the table, or outside while he’s sleeping (since he can’t roll yet, the bassinet is quite safe).

When we got home from the hospital it definitely took a while to find a place for everything… that’s’ the thing about a tiny house–if something doesn’t have an official spot, you trip over it all day.

It’s winter, so it’s been chilly and we’ve been having more indoor time than usual– but so far it’s working okay! Here we are in a calm moment with the oldest playing playdough while the youngest is on the couch in his bassinet.

Or, here is playing on the couch with the baby on the table:

In that picture, you can see the bed lofted up out of the way (with the arm rail).

So far, the baby hasn’t been a major crier in the night, and when he does have crying spells, he hasn’t woken up the oldest yet. It’s been nice being in a small space since I can keep an eye on the oldest while nursing (there’s not really anywhere he can go/ get into), and having less to clean has been GREAT.

When people ask us about having even one kid in a tiny house (let alone two!) one of the things they are worried about is the lack of privacy/space to run around. Giving our oldest the upstairs loft has given him a little place of his own, and he’s loved going up to play trains and cars for, yes, even an hour at a time!

Headphones have worked really well for the times I’ve wanted to take a nap to catch up on sleep and needed to just block everything out for a while.

But also– our personalities are such that we are very happy with lots of togetherness and snuggles at this stage of our lives. 🙂 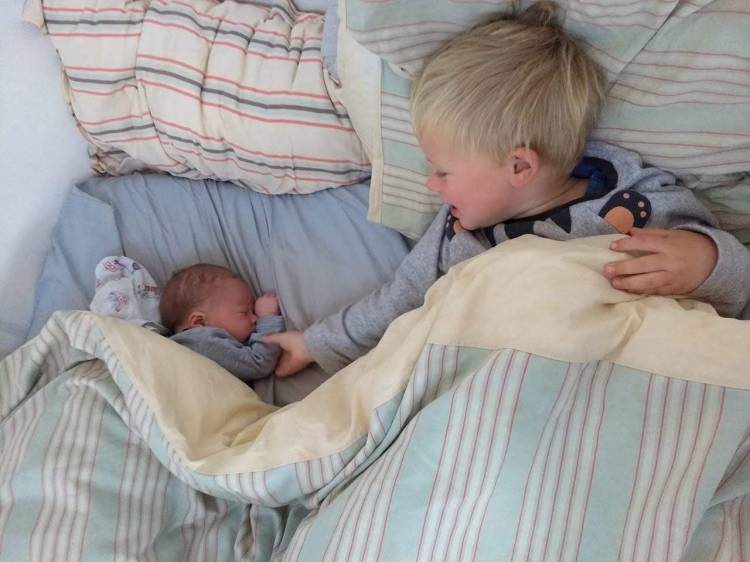 Of course, with this view…. no tiny house seems small!