I grew up in a sub-culture that was a bit famous for not being very good at listening. When people think of evangelicals, a lot of times they think of things like “intolerant”,  and “judgemental.” Most evangelicals don’t think of themselves in those terms. We think we’re loving, but unfortunately that love hasn’t often been communicated very well through our actions.

One reason why I think it doesn’t get communicated is because like the Pharisees, we think of our relationship with God as something that has to do with our own moral rightness, rather than grace. Somehow we think if we rub shoulders too much with “the world” we might just get contaminated. We need safe, Christian spaces for our children, free from the influence of “worldly values.” We can go out and “do evangelism”, but we can’t ever invite people really into our lives, because their sin might end up corrupting us.

For example, when David and I got back from Camino, one of the things we asked people was if they would feel comfortable hosting friends in their home who didn’t follow Jesus and embraced a lifestyle that was contrary to what we believe the Bible teaches. Most of the friends we made on Camino weren’t followers of Jesus, and embraced a variety of lifestyles that were different to our own. We had been shown such hospitality and developed good friendships while on Camino, and wanted to reciprocate and invite people into our world. But we were surprised at how many of our friends we talked with said, “Well- you could have them come see you, but you’d need to house them in a hotel or something, but you can’t let them stay with you, since that’s endorsing what they do.” One person said, “Your home is your sanctuary– you need to watch what you let into your home, to keep it from being defiled.” That didn’t really sound very hospitable to us, and didn’t think it would sound very hospitable to our friends. But I don’t think the people talking with us could hear how their own words sounded. 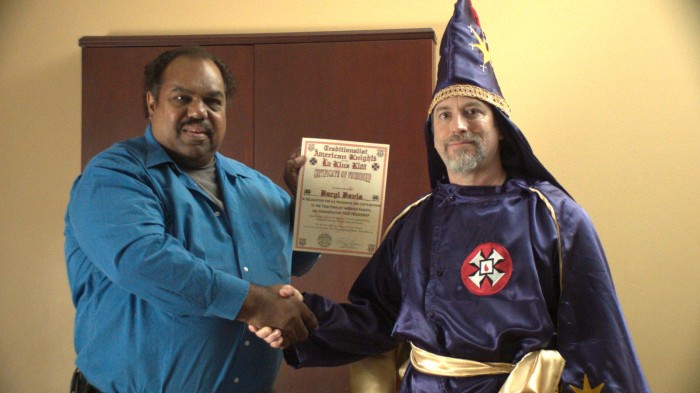 Last night, David and I watched a documentary about musician and actor Daryl Davis called Accidental Courtesy.   (Watch the trailer here). Daryl is a black man who has a hobby of making friends with people in the KKK and other white supremacist groups. His basic philosophy is, “How can someone hate me if they don’t know me?” and then he goes out and gets to know them. He’s formed friendships with dozens of white supremacist leaders, and through these friendships, dozens of them have ended up leaving the Klan. When they leave, they give Daryl their robes. Right now he has over 24 KKK robes. One day he says he’ll open a museum.

There was one particularly moving story about a Klan leader who ended up being imprisoned. Daryl phoned up his wife and introduced himself, and she started cursing up and down. Once she calmed down a bit, Daryl explained he just wanted to get to know her and see if there was anything he could do to help now that her husband was in a federal prison. He ended up driving her and her daughter over 6 hours to the federal prison so they could visit their husband and father. This woman said that no one in the Klan had offered, but Daryl did, and that was part of forming a friendship with Daryl. Through that friendship, she and her daughter ended up leaving the Klan entirely. Daryl has invited Klan members to his wedding (he actually married a white woman, which really goes against Klan white supremacist doctrine about race-mixing), but the Klan leaders came. He has a former Klan member as a godfather for his daughter. He’s been invited to Klan rallies, and he goes. He says it’s part of being friends and listening.

And it makes people mad. Some racial justice activists say he’s going too far. You can interview Klan members, but actually being friends with them or going to their rallies crosses a line. You can “go out to” those racists to “do battle” over their wrong beliefs, but you can’t invite them in. You can’t have them over for dinner. You can’t laugh at jokes together.

In the documentary, Daryl meets with the head of the Souther Poverty Law Centre, which prosecutes hate groups. The senior fellow of the SPLC had a charter of one of the KKK branches that was surrendered to them when they won a lawsuit against them and shut them down. Daryl has a certificate of friendship from an Imperial wizard of the KKK. When Daryl talks with the SPLC leader (and at a later point some BLM activists), it’s clear the approaches are different. One is more focused on systemic change and the other on individual change (and BOTH are super important for ending racism). But what stuck out to me in the movie was not the different approaches, but how righteously angry the SPLC and BLM activists sounded about what Daryl was doing. The way they talked, racism was a poison that could contaminate you, and nothing good could come from having racists over for dinner, let alone having them attend your wedding, or going to their events. Sounded like the Pharisee’s ideas on moral purity to me.

I think sometimes we say we want relationships with people who are different than us, but we don’t actually mean it. Relationships are messy. They involve give and take. They involve people, with all their contradictory-ness. It’s easier to stay where we are, whether in our progressive liberal anti-racist bubbles, or our evangelical-family-friendly bubbles and “preach to the choir” about our beliefs. It’s harder to really listen and be friends.

But I think being friends is a big part of bringing change. And it comes back to the question that I always come back to when I think about social justice or change:  Do we want to be right? Or do we want to bring change?

It reminds me of the brave Jewish guy who made friends with Derek Black, the son of Don Black (former KKK leader, and alt-right leader who runs the biggest white supremacist website) rather than excluding him as everyone else at his liberal college was doing. And through that relationship, Derek Black ended up leaving the alt-right.

The most important thing I learned is that when you are actively learning about someone else you are passively teaching them about yourself. So if you have an adversary with an opposing point of view, give that person a platform. Allow them to air that point of view, regardless of how extreme it may be. And believe me, I’ve heard things so extreme at these rallies they’ll cut you to the bone.

Give them a platform.

You challenge them. But you don’t challenge them rudely or violently. You do it politely and intelligently. And when you do things that way chances are they will reciprocate and give you a platform. So he and I would sit down and listen to one another over a period of time. And the cement that held his ideas together began to get cracks in it. And then it began to crumble. And then it fell apart.

McHugh says: “The question that drives this book is, how would our relationships change, and how would we change, if we approached every situation with the intention of listening first?”

So these are questions I’m thinking about right now:

View all posts by Steph E