We’re heading into the bloodiness of Holy Week in just a little while. Good Friday looms at the end of Lent, this horrible black, silent day where we actually contemplate the slow suffocation of a Palestinian Jew on a cross. Uh, depressing. I’d much rather skip it and get to the chocolate Easter eggs on Sunday.

I’m not alone. The tradition that I was raised in has been called a tradition of “solar Christians“– faith and answers exist in a narrative of victory, simplicity, certainty–in daylight. In America, or as white Christians anywhere, it’s easy to have the adolescent assurance that we’ll be forever young and nothing can stop us. We’re certain. We’re redeemed. We’re alright.

We’re not that different from the culture around us: we don’t like feeling guilty. We don’t like talking about our failures, our brokenness, about the things we didn’t know. It’s only human, after all. We want to distance ourselves from discomfort. We cast ourselves as better than the person next to us. We liberals relish stories of crazy racists down South, not because it’s useful, or it does anything to fix racism, but because it makes us feel better about ourselves. And it makes sense. It goes against every instinct of self-preservation for an average, nice white person to seriously examine and confront their own racism. And if we don’t want to admit its there, how can we examine it?

The Christian perspective on racial reconciliation, though, gives us something unique. Good Friday reminds us all that we’re all messed up. All of us. We’re messed up in different ways, of course. It’s silly to say that a young  black girl raised in poverty in South Africa is going to be broken in the same way as a middle aged white man raised in the US, or an elderly South African of Indian descent. Because of my family, my experiences, the community around me, the access I’ve had to different resources, the choices I’ve made, and the way society views me, I’m going to be broken in different ways than you. That’s why even though we Christians make universal statements like, “Everyone has fallen short and is broken” it’s silly to talk about people as abstract humans. We are all broken, yes, but we are all particularly broken. And repentance and restoration for me look different than they will for you. The question is not what God is asking of my neighbour-what is he asking me?

I mean, it’s uncomfortable. It will always be uncomfortable. But, in theory, I should be more willing to listen, because I’m not hearing anything unbelievable about myself. I sin in thought and word and deed, in things I do and things I leave undone: so I confess every week in church. Having a new way that I’m sinning pointed out to me isn’t pleasant, but it should be expected. 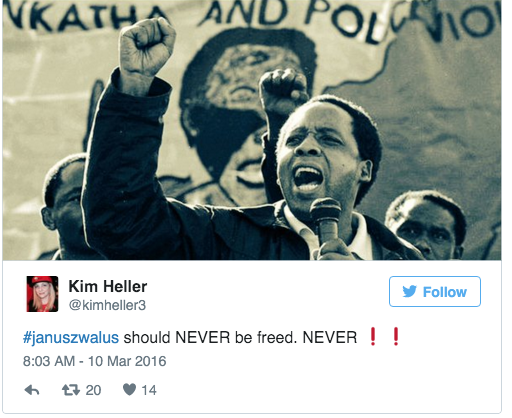 But this talk about racism and privilege is also uncomfortable because I don’t want to be lumped in with the KKK or Broederbond. Not that I would admit it outright, but I spend my life putting people like that in a different box so I can feel superior. I’m different than they are, right?

Well, yes. But the radical and uncomfortable thing about the cross is that it says it’s for those who are oppressed  as well as those who are the oppressors.

An interview with pastor/theologian Flemming Rutledge really convicted me this week:

“Civil Rights activist Will Campbell reminded us that those who wish to be judges will also be judged. During the civil rights era, he was the only prominent person who went back and forth between the black community and the Ku Klux Klan, showing in a very radical way the justification of the ungodly, the God who makes no distinctions. The God who is able to redeem even such a person as you or me. I was walking down the street with Campbell once. I was young then, and I said in this lofty way, “My father was a racist,” And Will said, “Fleming, we’re all racists.” His way of ministering to the Ku Klux Klan was to be alongside them. He sat with Sam Bowers during his trial. If there was an evil person, Sam Bowers was an evil person. He admitted that he had a great deal of difficulty sitting by Sam Bowers, but he did it as a witness to the justification of the ungodly.”

I spend so much energy trying to distance myself from the label “oppressor”. It’s an ugly word. In South Africa, calling someone “racist” is just about the strongest moral condemnation you can give a person.

It’s no different in America. Sure, there are some people who embrace the Trump-rhetoric, but all the rest of us band together and look down our noses at them and say they’re racist. Implication being: they are racist and I am not.

We love stories of extreme racism. In fact, most of the examples we share are extreme. Even in our churches when we say we’re trying to promote racial reconciliation, we often share crazy examples of racism we come across– we say it’s to illustrate that racism is alive and well today, but it also serves very nicely to exempt us all  in the audience from applying it to ourselves.

I do not want to stand shoulder to shoulder with Walus, the guy who shot anti-apartheid activist Chris Hani. Or John Newton, the slave trader. Or the KKK’s grand wizard. I don’t have to repent of selling slaves or murdering civil rights leaders.

But there are things from which I do have to repent so I can be healed and made whole, and the bloody cross looming at the end of Holy Week reminds us of the high price of our freedom and restoration. The thing about grace is you can only receive it when you admit you need it.

I can’t be reconciled to God and to my black brothers and sisters if I’m not willing to confront racism. And that doesn’t mean I get to set the agenda, and decide what it is I think I’ve done or undone. It means I have to listen, really listen, to my black friends and fellow Christians and hear what they are saying. I have to admit I need forgiveness, from God and from them.

Who is it you don’t want to stand shoulder to shoulder with? Chances are, you don’t want to get too close to their wretchedness because you’re afraid they’ll look a bit familiar. Except maybe if we stopped trying to climb up on pedestals and remove ourselves from that group, we’d be able to see we’re just as wretched as they are.

And, like that once-upon-a-time slave trader John Newton said, once you realize you’re a wretch, grace starts to sound awful sweet.

PS. Remember that time I wrote about lamenting racism in church? My sis-in-law’s church just did that the other week! Learn more about it here.

View all posts by Steph E